This is the blog page for Australia's Recreational Fishing.
Join us and stay up to date in the fight against those who seek to bully us off our beloved waterways.

Don’t let recreational anglers go unheard and get walked all over.
Time to Start fighting back!
We Fish and We have had enough...
We Want Recognition, Consultation, and a fair go...

The marine park advocates have followed their war plan down to a tea, they have now dragged out Dr Daniel Pauly to visit Australia, and he is here next week.

Dr Pauly's life work has centred almost entirely on anti-fishing funded by PEW, he is here for one reason only, to speak to our Minister Burke on the management plans for our marine parks.

Dr Daniel Pauly in  through the Fisheries Science Centre has received at least $25 million PEW dollars, The Fisheries Centre at UBC has fared quite well under Dr Pauly's headline grabbing leadership.
When the Hites study about PCBs in farmed salmon was published, Dr Daniel Pauly of UBC told the press that if his daughter was pregnant, he would tell her to avoid farmed salmon.  In 2002, Dr Pauly likened salmon farms to floating pig farms.  "They make a terrific mess," he told the L.A. Times.  Three days later, the Pew Charitable Trusts paid Dr Pauly $300,000 to publicize the findings of the Hites study. In 2009 Dr Daniel Pauly featured in the first major documentary about global overfishing The End of the Line.
In fact I am struggling to find one single bit of research by Dr Daniel Pauly that wasn’t funded by PEW in some way shape or form.


naturalSCIENCE: How does over-fishing compare in its impact on aquatic ecosystems to other disruptions such as pollution and climatic aberrations such as El Niño?
Dr. Pauly: On a global basis there is no environmental factor affecting marine communities (i.e., removing fish and bottom habitat) that is comparable to the fisheries in impact. El Niño and other local effects modify the range and recruitment of various species, but do not remove entire communities, i.e., they do not cause species to become extirpated throughout most of their range as the fisheries do. After all, fisheries are meant to kill fish. It is the public who believes that the 'environment' disrupts fish resources, and it is a useful smokescreen for the industry.

So ecosystem degradation, global warming, pollution is not a problem just fishing is, this highly acclaimed marine research forgets to mention that fish kill fish also, in our marine environment  there exists no unexploited population most of the species are designed the way they are for this very fact.

naturalSCIENCE: What role do you see aquaculture having in terms of controlling fish harvests, and how does intensive fish-farming affect species diversity?
Dr. Pauly: Aquaculture has no bearing on the control of fish harvests. It may actually be deleterious to fisheries management. With the growth of the fish-farming industry, wild fisheries management may be seen as superfluous. In terms of species diversity, in the North Atlantic, salmon farming has a very negative effect on the genetics of wild salmon.

We should be outraged that PEW has brought out Dr Daniel Pauly, to influence our government, and public, when at the same time this very government is failing in talks with the very stack holders that will be greatly affected by these marine parks, while our voices as recreational and commercial fishers are being ignored, an obviously self-interested agenda driven scientist is going to meet with Minister Burke, for what I am guessing will be a conversation on the management plans for our marine parks, I could be wrong and Dr Pauly might just be offering advice to Minister Burke on how to get onto the PEW dollars band wagon after the next election.

There also appear to be some links with Paul Sheridan from Essential Media/Essential Research in bringing Dr Daniel Pauly to Australia, although at this stage they are unconfirmed, you might remember the story on the blog back in July about the conflict of interest with the Paul Sheridan who was employed to run PEWs save our marine life campaign also being responsible for a poll that showed that the public overwhelmingly support the marine parks idea. 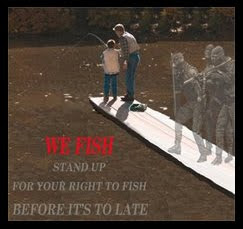